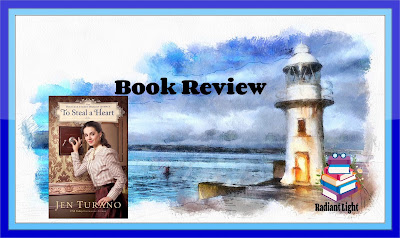 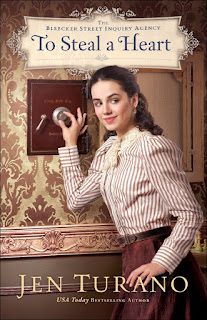 Title: To Steal a Heart

After a childhood as a street thief, Gabriella Goodhue thought she'd put her past behind her until a fellow resident at her boardinghouse is unjustly accused of theft. In the middle of breaking into a safe that holds the proof to prove her friend's innocence, Gabriella is interrupted by Nicholas Quinn, the man she once considered her best friend—until he abandoned her.

After being taken under the wing of a professor who introduced him into society and named him as heir, Nicholas is living far removed from his childhood life of crime. As a favor to a friend, Nicholas agreed to help clear the name of an innocent woman, never imagining he'd be reunited with the girl he thought lost to him forever.

As Gabriella and Nicholas are thrown together into one intrigue after another, their childhood affection grows into more, but their newfound feelings are tested when truths about their past are revealed and danger follows their every step. 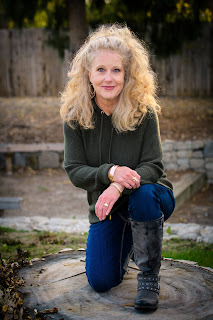 About Jen Turano
A USA Today Best-Selling Author, Jen Turano has written the critically acclaimed Ladies of Distinction series, and A Class of Their Own series, published through Bethany House Publishers. Her novel, After a Fashion, was chosen as a top pick from Romantic Times, as JenTuranowell as being named a top ten romance of 2015 from Booklist.  It is also a nominee for Romantic Times 2015 Reviewers’ Choice Award. Her book, A Most Peculiar Circumstance, was chosen as a top ten romance by Booklist in 2013. Her seventh book, Playing the Part, released in the spring of 2016, and will be followed by a new four-book series, Apart from the Crowd. When she’s not writing, Jen spends her time outside of Denver with her husband and neurotic Cattle Dog, enjoying herself as an empty-nester since her son recently abandoned her for the college life.
Website || Facebook || Twitter || Instagram
My Thoughts
Another fun historical novel that will have you laughing from the beginning. In Ms. Turano's signature style she pens a story set in the Gilded Age filled with wonderful characters who continually get themselves into difficult situations.
All I kept seeing when Gabriella was dressed as a man sneaking into a high-society costume ball in hopes of proving who the thief was, was Barbara Streisand in Yentl.
This book was a hoot! Filled with hilarity on every page that had me laughing. I can already suspect that the following books in The Bleeker Street Inquiry Agency are going to be just as fun!
Fans of Jen Turano will want to add this book to their TBR. I highly recommend this book!
Disclaimer: I received a copy of this book via the publisher. I was not required to write a review. All thoughts and opinions are my own.
at November 29, 2020

Title: As Dawn Breaks Author: Kate Breslin Amid the Great War in 1918 England, munitions worker Rosalind Graham is desperate to escape the... 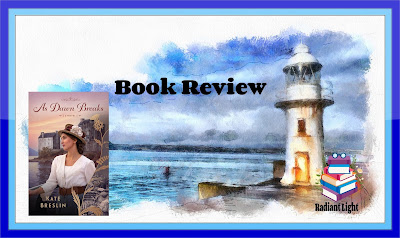