A Gift Like No Other by Julie Lessman Review and Giveaway

Her dream is writing. His is the perfect wife and mother. Until God fulfills them both with a dream like no other. Twelve years ago, Faith O’Connor happily gave up her dream as a copywriter to become a wife and mother, clinging to her husband’s promise she could return someday. But when the opportunity arises to write for the Boston Herald again two days a week, her dream hits a snag … along with her marriage. To Collin McGuire, family is everything because he never really had one of his own. Raised by a father who died early and a mother who didn’t care, Collin is determined to give his children the very best with a full-time mother. But when he denies Faith her dream, he soon discovers he’s denied his own as well … until Christmas day brings a healing through a gift like no other.

Julie Lessman is an award-winning author whose tagline of “Passion With a Purpose” underscores her intense passion for both God and romance. A lover of all things Irish, she enjoys writing close-knit Irish family sagas that evolve into 3-D love stories: the hero, the heroine, and the God that brings them together. Author of The Daughters of Boston, Winds of Change, Heart of San Francisco, Isle of Hope, and Silver Lining Ranch series, Julie was American Christian Fiction Writers 2009 Debut Author of the Year and has garnered over 18 Romance Writers of America and other awards. Voted #1 Romance Author in Family Fiction magazine’s 2012 and 2011 Readers Choice Awards, Julie’s novels also made Family Fiction magazine’s Best of 2015, Best of 2014, and “Essential Christian Romance Authors” 2017, as well as Booklist’s 2010 Top 10 Inspirational Fiction and Borders Best Fiction. Her independent novel A Light in the Window was an International Digital Awards winner, a 2013 Readers' Crown Award winner, and a 2013 Book Buyers Best Award winner. Julie has also written a self-help workbook for writers entitled Romance-ology 101: Writing Romantic Tension for the Sweet and Inspirational Markets. Contact Julie through her website and read excerpts from each of her books at www.julielessman.com.

Snippet from a Chapter in the Book

Get ready for some holiday cheer! This new book of Ms. Lessman will have wives wanting to snuggle up to their hubby's next to a warm fireplace. Since Julie Lessman first penned A Passion Most Pure her tagline has been passion with a purpose and she's lived up to that with every book she writes.

She puts her character's in compromising situations in order to highlight real issues that plague marriages today. Taking those situations she weaves nuggets of Bible precepts into what her character's are dealing with showing God and His love.

This book has a warning of a higher level of romantic passion, I didn't find it to be inappropriate. Ms. Lessman truly has a gift of writing passion filled love scenes cleanly and keeping it within the bounds of marriage.

As a reader once I finish reading one of Ms. Lessman's books, whether a novella or full length novel, I feel as though I have had a long conversation with her. Her books come straight from her heart and you feel that with every turn of the page.

"The seeds of divorce. It's a term I read about once, where thinking negative thoughts about your spouse --- focusing on them --- can plant the seeds of divorce in a marriage, possibly taking the marriage down from there." Faith

Disclaimer: I received a copy of this book from the publisher in association with Singing Librarian blog tours. I was not required to write a review. All thoughts and opinions are my own.

To Enter the giveaway follow the link to my interview with Julie HERE.

Julie Lessman is one of my MUST read authors! Her stories are exquisite masterpieces!

Thank you Radiant Light for this great review! You touched on all the reasons I love Julie's books! Not only is there a beautiful romance,but a hearttouchng story about love,family,and faith. It touches me how Julie is not afraid to open her heart to her readers. A Gift Like No Other is no exception and is another of her 5 star winning novellas! Special thanks to Julie Lessman for writing another amazing story!! Am a Journal Jots reader

ANDI -- LOVE the review, my sweet friend, but no surprise there! You always bless the socks off of me with your AMAZING reviews, so THANK YOU, THANK YOU!!

Caryl Kane -- LOL, I need to hire you as my publicist, girlfriend, with phrases like "exquisite masterpieces," so BLESS YOU, my friend!

Lynne Feuerstein -- You are SUCH a sweetheart, my friend, and I am SO happy our paths have crossed!

Julie, you are so welcome and I am so glad my review blessed you. I agree with Caryl and Lynne 110%!!
I adore you my sweet friend and God has blessed me with your friendship.

Welcome to another edition of Top Ten Tuesday! It's been awhile since I've had a post. Today's topic is Authors I'... 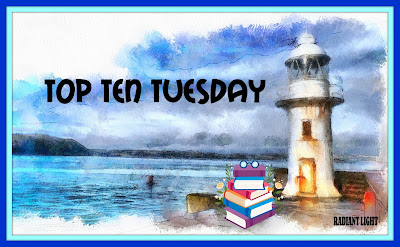