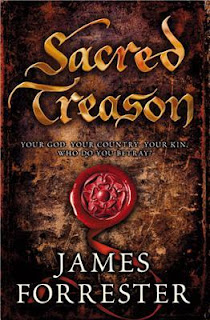 Book Blurb: London, December 1563. England is a troubled nation. Catholic plots against the young Queen Elizabeth spring up all over the country. At his house in the parish of St Bride, the herald William Harvey – known to everyone as Clarenceux - receives a book from his friend and fellow Catholic, Henry Machyn. But Machyn is in fear of his life, claiming that the book is deadly... What secret can it hold? And then Clarenceux is visited by the State in the form of Francis Walsingham and his ruthless enforcers, who will stop at nothing to gain possession of it. If Clarenceux and his family are to survive the terror of Walsingham, and to plead with the queen’s Secretary of State Sir William Cecil for their lives, Clarenceux must solve the clues contained in the book to unlock its dangerous secrets before it’s too late. And when he does, he realises that it's not only his life and the lives of those most dear to him that are at stake...

If you could have chosen your own name, what would it be?

'James Forrester' is actually my middle names. I am normally 'Ian Mortimer'. The surname – Mortimer – is pretty important to me. It was the root of my interest in history, for I learnt about the medieval Mortimers because of a fascination with the name. It also meant that I saw history differently from other people from an early age, as I noticed how the prejudices of historians unfairly treated the Mortimers of old. Also my aunt was called Mortimer – and she being a three-times grandslam tennis champion, including Wimbledon in 1961, it was inspiring to have people like her in the family. So I would be quite happy to keep my surname. As for my first name, my late father chose it for me; I wouldn’t change it. I am the first member of my family not to be called ‘John’ since the seventeenth century.

Nothing that’s relevant to my writing, and there’s nothing I want to brag about. Some people say some of the historical arguments I’ve championed are ‘brave’ or some of the speeches I’ve made at meetings of the National Park Authority; but in my opinion bravery should be associated with people who are truly brave – troops in Afghanistan, policemen and women in the deprived areas of cities, people working for peace in the Middle East, people combatting infectious diseases in Africa etcetera.

A large room at the top of my house with a chimney rising up through it from the floors below. I share it with a desk, a rosewood library table from about 1815, three computers, several chairs, including one from about 1750 given to an ancestor by the bishop of Exeter in the 1860s, several thousand books and a large number of CDs, albums and guitars.

Who is your favorite author and what is it that really strikes you about their work?

William Shakespeare. His work is magical. It contains so much truth and at the same time is so lyrical. And most thinking people are in awe of his achievement. Many are in love with his life story too – and its compelling mysteries.

What’s been the most challenging part of writing for you?
Satisfying my own expectations of myself. I fail every time.

Who has been your best supporter? How have they been there for you?

Without a doubt my wife. On the one hand I could not have spent as much time writing over the last 12 years if she had not basically supported me. But more than that, she chose to share my life, to live in this place where I chose to live. Thereby she has ceased that constant questing I had as a young man. If I lived alone I would be out every night; as it is I can work most nights.

Do you recall how your interest in writing originated?

No. I was writing poems before I was ten. However, there’s a story I tell about my interest in history. My parents used to take me to medieval castles as a boy – I loved the middle ages. One holiday when I was about 11 we visited Skenfrith, White Castle and Grosmont: three Lancastrian castles, the last one being the birthplace of the first duke of Lancaster. I enjoyed the first two castles greatly but was looking forward most of all to the third. I imagined Lady Lancaster holding her back, pregnant, coming down the stairs from the solar and entering the hall; I imagined the fire burning on the hearth in the middle of that hall, and the red lines marking out the shadowy stonework in the golden light of the fire, the dogs there, and the servants bringing wine and sweetmeats into the hall as a harpist played – and I got so carried away that I forgot the place was a ruin. When we arrived I stood dumbfounded in the roofless remnants of the hall and realised that everything here was so historical, so dead. But I thought the best way to see things – and people - was alive. A bit like butterflies: you see them in a museum all pinned out in a case, rows of dead insects. But they are best seen in flight, alive. That was when I realised by drive to understand the past was fundamentally different from most historians’ approaches. I wanted to see it living, happening.

What inspired you to write the genre that you write?

I am a historian by training but history cannot deal with some themes. I wanted to write about loyalty and betrayal, and to pick a historical way of doing that would have required me to find exactly the right ‘true story’ to say all the things that I wanted to say. That was going to be impossible. But by choosing to create a new story set in the past, I could use the intensity and the drama of the period to say something more exciting and more meaningful. Hence I chose to write historical fiction set in the early years of Elizabeth I’s reign. Why do you think there is so much interest in Anne Boleyn and the Tudors? Well Anne Boleyn is one of the great tragedies in world history: to seduce a king and then insist in not consummating the relationship until married, and then be killed by your husband on a trumped-up charge, and to die forgiving him publicly in the hope that by doing so you will save your daughter… Heavens! There are so many archetypes in the story that it should be an opera. The attractions of the Tudors generally are much wider. It is the first period in English history in which women play a prominent part: Henry VIII’s wives and daughters, sisters and concubines between them allow a much more female-centered view of the past, which otherwise is mainly about men doing male things. The middle ages features so few prominent women that it is difficult to drum up support for that period: it is just too imbalanced. Then there is the fact that the Tudors were brilliant visual propagandists: we can see their faces in ways we cannot see earlier generations. Coupled with this being the period furthest from ours when we can read their thoughts in their own words and more or less understand them, the 16th century stands like a great historical gateway on the way to modernity. Everything before that is alien; everything since increasingly like our own age. And the Tudors have Shakespeare.

How did you come up with this story?

I was writing a biographical entry for the Oxford Dictionary of National Biography on Henry Machyn, a chronicler in London, but also arguably the earliest English diarist. I discovered a copy of his will, which mentions his chronicle. This he bequeathed to a Mr. William Harvey, Clarenceux King of Arms, when he died in 1563. In tracing the history of the chronicle I came across a secret society to which Machyn and some of his friends belonged, called the Knights of the Round Table. After that seed was planted I dreamed up the rest of the story on walks among the hills of Dartmoor, in Southwest England, where I live.

My Thoughts: Reading Sacred Treason was like being immersed in 16th century England in the midst of political turmoil. You could feel the tension and the plotting to keep Elizabeth on the throne through the pages. Until being asked to read and review this book I had never heard of James Forrester / Ian Mortimer. This book kept me turning pages, and guessing to the very end. If you are a fan of Tudor history like I am this is a book not to be missed!

I haven't participated in First Line Friday for quite a long time. I just finished reading Heirlooms by Sandra Byrd and thought it wou... 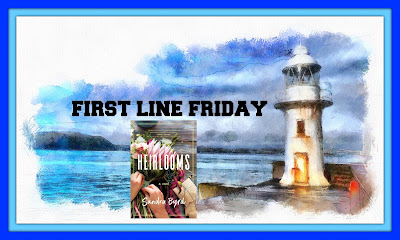