Preview: Walk With Me

Along with being the author of Walk With Me (forthcoming September 2012, River North/Moody), my fiction has been published in numerous journals including Image, The Southern Review and The North American Review and included in the anthology series, Not Safe But Good, edited by Bret Lott and published by Thomas Nelson. I’m also the author of a young adult novel, The Counterfeit Collection (Tyndale) and I’ve written feature articles for many publications such as Guideposts, Leadership, and Partnership.


Before writing full-time, I worked in book publishing as an acquisitions editor and then as Editor-in-Chief at Princeton University Press. Since 2000, I’ve lived in Morocco where my husband is the pastor of Rabat International Church. We have two married daughters and four delightful grandchildren.

A Word from Annie:

If you still want to know more about me, you may be interested to learn:

On the Myers-Briggs scale, I’m not an I for introvert. I’m an H for hermit.


But I’ve been known to say, “We’re having a small gathering; only 10 people.”


I live on the west coast — of Africa.


I once told God I’d marry anyone except the man who became my husband.


I prefer to make things up rather than do research, although I have been described as an ‘infomaniac’. 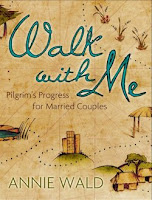 . They are blissfully in love and bound to each other by the Cords of Commitment.

much more difficult than they expected. When they find themselves laboring

through the Swamp of Selfishness, crossing the dismal Plains of Distance, and

nearly becoming separated by the River of Unfaithfulness, their love for each

other and for the King is challenged. They must choose whether to continue on

together, not knowing if they can be warmed again by the Kindling of Affection,

or visit the Valley of Cut Cords to journey alone once more.


If you'd like to read a chapter excerpt of Walk with Me, go HERE.